Most people associate the use of modern soakaway crates with infiltration use. This is where stormwater is fed into the soakaway structure where it is held for long periods, allowing the water to slowly infiltrate into the surrounding soil, removing the need for stormwater drains and at the same time recharging the natural levels of groundwater. Soakaway crates are now commonly used for this purpose on most new build developments, both for domestic and commercial applications.

There are however other uses for soakaway crates, namely rainwater recycling and attenuation. Here we look at attenuation.

The term attenuation actually has several meanings. But the context that we are interested in is the one that derives from physics, whereby attenuation refers to a reduction in a property such as a force or an energy, brought about by spreading, scattering or absorption. In this case attenuation brings about a reduction in the force of stormwater flow by carefully controlling the level of the flow.

So that's the science bit. In real life terms, attenuation (or detention as it is sometimes referred to as) means holding back large amounts of rainwater in pre-built tanks allowing the discharge rate to be controlled at a predetermined rate by a secondary device sited at a discharge control point (DCP).

The slow rate of discharge enables local authorities to avoid downstream flooding and the erosion of water ways due to heavy flows. 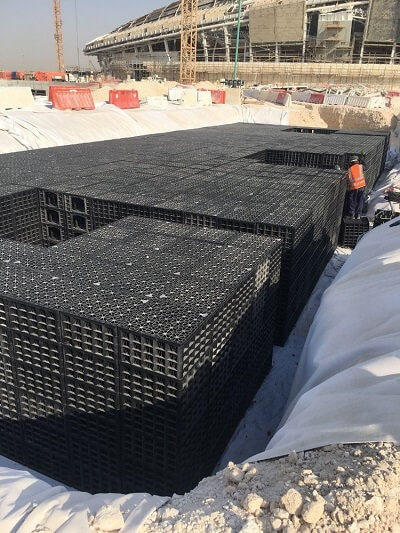 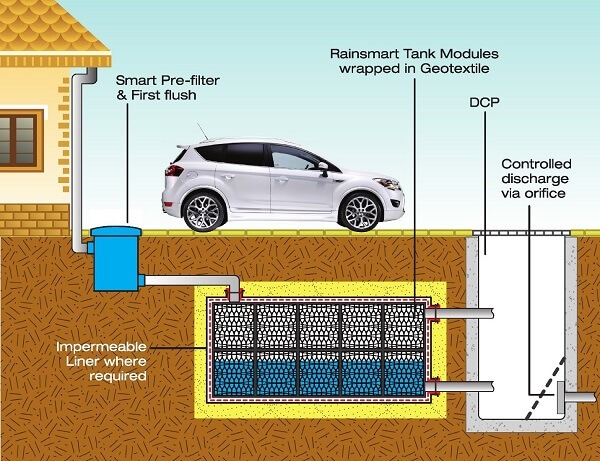 The water stored in the attenuation tank is wrapped in membrane to stop soil particles from entering the system. The type of membrane used depends upon the local flood plan requirement and the siting of the tanks, i.e. proximity to buildings. If all the stormwater needs to be channeled to a downstream point where it can be safely discharged, an impermeable membrane is used. This keeps all the water within the attenuation system.

If some filtration is acceptable in the soil area surrounding the attenuation tanks then a geotextile membrane is used.

When the levels of water flow are at their highest, the controlled discharge device holds back the water and releases it at a carefully controlled rate, preventing the river or watercourse into which the stormwater flows from spilling over and flooding. There are several devices on the market used to carry out this function, Hydro-Brake being a leading brand.

If you need any further information on attenuation tanks, membranes or discharge devices such as Hydro-Brake please do not hesitate to contact us.

Items you will need